For most of the AFV's in my Whirarwistan campaign I decided to use any available pre-paints looking for plastic/die-cast bargains on eBay. Various companies make 1/72nd pre-paint armour including the likes of Dragon, but for Whirarwistan I turned toward the models made by Altaya (aka Amercom aka Deagostini) (they have been issued under various names in various countries). 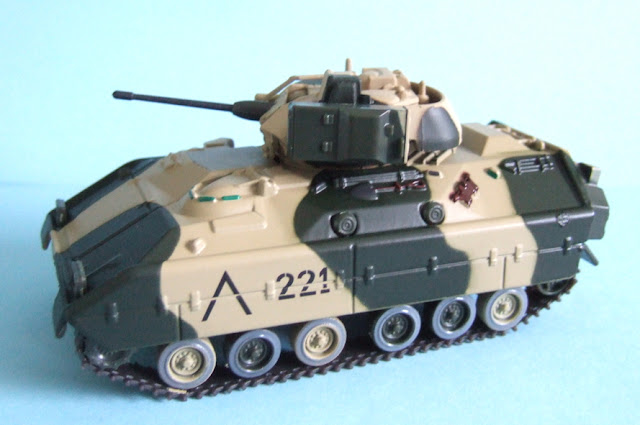 Four M2 Bradley's arrived today, pre-painted in the sand over green camo that saw short service in Saudi Arabia soon after the Kuwait invasion of 1991. I went for this as I thought it would make a nice change from the overall US tan seen in Iraq and Afghanistan. The models are okay, they could do with some stowage adding and a good weathering. Also the bogies on one are poorly fixed and will need carefully removing and re-gluing. However for around £7 a model including postage I'm happy enough with them. 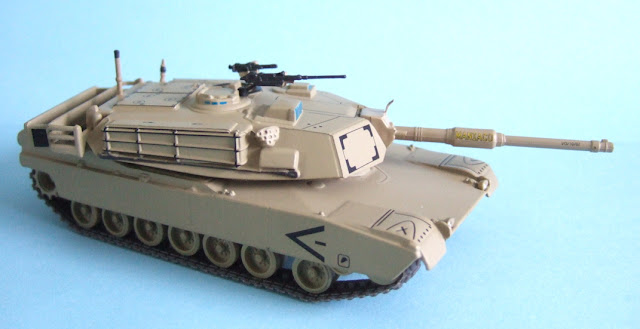 Whilst the focus of my games will be infantry actions (with IFV support) I couldn't resist an eBay bargain of an M1A1 (HA) for a fiver. Again this is an Altaya model albeit an USMC model in overall tan. I am not sure whether or not to repaint to match the Bradleys, probably not. Reading about the operational history of the M1A1 in the Gulf War it is clear that the T-72's had a major problem penetrating the front armour so it may be the Russki's in Whirarwistan have a bit of a problem on their hands! :-)
Posted by Steve at 10:23

Email ThisBlogThis!Share to TwitterShare to FacebookShare to Pinterest
Labels: AFV, US